So my birthday was coming up soon, and I was on the lookout to add another figure to the collection. I recently pre-ordered the Shibuya Scramble Demon Rem figure from Tokyo Otaku Mode Shop, so I had some redeemable points and a 10% coupon available. I went searching through their in stock inventory and happened to stumble upon a bunny girl named Veronica.

I wasn’t really into bunny girls; catgirls are more my cup of tea, but this military-style bunny girl born from an illustration by Shimada Fumikane-sensei, who also illustrated the characters for Strike Witches (among other series), piqued my interest. I found Shimada Fumikane-sensei’s illustration of Veronica from another blog post on the web (I couldn’t seem to find the original). Good Smile Company’s page for Veronica also provided some additional details on her as well.

I’ve seen FREEing’s lineup of bunny girls before, so this wasn’t new, but something about her holding a gun and that waistband was really neat. After sitting on this thought for around a week, I finally gave in and ordered her.

As the global COVID-19 pandemic rages on, so too does the temporary suspension of packages coming into Canada via national mail (e.g. EMS, Air Parcel, and SAL). Despite knowing this, I opted for EMS shipping, which, after a week or so, I bumped up to FedEx for an extra fee: time is money. After two weeks of waiting, she shipped and arrived safe and sound within a few days. The middle part of the right side on the front of the box was slightly dinged, but the figure itself was fine.

The box itself was still pretty big. I put it beside the BINDing Coconut box I had, and it was pretty close in size. I guess that explains why shipping was expensive. Taking her out of the cardboard box, we obviously have the figure itself, along with her PPK handgun on the top left of the box. We see the usual plastic on the figure to protect the paint, and some bubble wrap at the back to protect the hair ribbon from moving around during transport. Being a 1/4 scale figure, she definitely does have some weight.

After taking her out, it took me over 30 minutes to get the handgun into her left hand. Her left hand detaches from the body, making it easier to slide the gun in. That being said, I still had to apply a bit of force in order to slide it into her hand. For any figure owners, any time force has to be applied, it’s a bit scary because you never know if you’ll break anything in the process. Thank goodness that didn’t happen, and with that, this is how she ended up looking on my desk:

At first glance, Veronica is roughly 33cm tall with her navy blue bunny suit, equipped with a PPK handgun in her left hand. She dawns a pair of bunny ears on top of her long, wavy brown hair, with the left one slightly bent downwards towards the front. Tied behind her hair is a blue ribbon that streams down on both sides. On her neck, she styles a white collar paired with a short navy blue tie that sits above her large, noticeable breasts. On both arms, she wears two additional navy blue sleeves, along with white gloves. Around her waist is belt with two pouches on either side of her legs. Strapped to her left thigh is her gun’s hoister. She kneels on fishnet stockings, which is actually made of fabric. On her feet are a pair of navy blue heels, with brown bottoms that match her hair.

Taking a closer look at her waist, we see her belt with the pouches. Strapped to her left leg is her handgun’s holster. The detailing on her bunny suit is pretty nice. I do like those three lines coming down from the chest to the waist: I think they really bring out the curves in Veronica’s body.

As we continue to her back, we’ll see the cottontail attached to the back of her suit:

As we continue to the back, her butt is pretty well sculpted: they are nice and round. In my opinion, the fishnet stockings help accentuate this fact immensely.

On the topic of fishnets, another great detail that was done with them are near the knee joints. I really like how the tightness is shown on the back side of her knees. +1 ero point 🙂

As we move up towards the back side, we’ll see Veronica’s hair and blue ribbon have been beautifully sculpted. I particularly like the braids that go towards the middle.

As we move back towards the front again, we see Veronica’s left ear. Her right ear is slightly blocked by her hair, but having her left one exposed like that just gives her another nice sexy feel.

Finally, we’re back to the front, with a white collar around her neck, complete with her short navy blue tie that sits just on top of her breasts.

Taking a step back, here she is on a whole:

To wrap it up, I took a 360 video of Veronica on the electric turntable I bought a while back. I have her sitting on a cat-shaped coaster, and it turns out the cat ears on it are perfect for her feet to rest on. I think it captures her elegance very well, and exemplifies the glossy nature of her outfit.

Overall, I am really happy I got this figure. Veronica’s soft expression in a erotic bunny girl suit, yielding a gun in her left hand and and caressing her right thigh with the other makes her a nice addition to the collection. I had fun while taking photos of her. This time around, I used white fabric that I got from IKEA as a backdrop, and played around with the lighting some more. Definitely learning lots while tinkering with the various settings on my camera, so there is progress on that front. For now, she’s going to sit on my home office while I work. She’ll be nice to look at during my breaks. 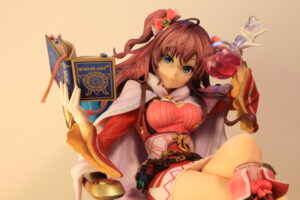